Design a site like this with WordPress.com
Get started
Skip to content
August 16, 2020August 16, 2020 Butterfly Kisses and Silly Wishes

Palindromes, for some, are pesky rather than pleasant but for this “word geek” as some would call me, I find them quite palatable, albeit quite the challenge to include in a kidlit story!

According to Miriam Websters on-line dictionary, a palindrome is “a word, phrase, or number that reads the same backward or forward.”  I had never considered palindromes to be anything other than numbers but a whole new world opened with my research for this blog post!

Words or sentences that when read forward or backward have the same meaning are palindromes.

A great example of a name palindrome is ABBA (a musical group from the seventies).  A common name palindrome is Bob but a quick google search (if you want to your characters to have palindrome names) brings up other names including Otto and Hannah.  Even the shape shifter from Star Trek Deep Space Nine is named Odo…a palindrome!

A search on Good Reads for books with Palindrome in the title,  offers quite a variety of books across all genres, including:

MOM AND DAD ARE PALINDROMES by Mark Shulman

IF YOU WERE A PALINDROME by Michael Dahl 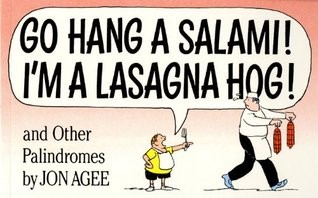 My favorite example of a palindrome is a poem titled Doppelganger written by James A. Lindon

“Entering the lonely house with my wife

I saw him for the first time

Peering furtively from behind a bush …

A shape amid the shadows,

A momentary glimpse of gleaming eyes

Revealed in the ragged moon …

A closer look (he seemed to turn) might have

Revealed in the ragged moon

A momentary glimpse of gleaming eyes

A shape amid the shadows,

Peering furtively from behind a bush,

I saw him, for the first time

Entering the lonely house with my wife.”

It took me several reads to realize there were two stories going on here.  Do you see them?

Of course, this would certainly (in my opinion) be a great idea for a writing challenge.
To further pique your interest in palindromes, check out the following links:

Thanks for stopping by!  Hope you enjoyed my post on Palindromes!  Feel free to leave a comment.

Finally working on my lifelong dream of having a career as a published author.... Born in Tennessee, raised in Massachusetts (How 'bout those Red Sox?) and now living in western Maryland. View all posts by Butterfly Kisses and Silly Wishes

3 thoughts on “A Parade of Palindromes”