2020 is David Harrison’s 50th year of writing for children. In that time, he has penned more than 100 books, including 21 poetry collections. His books have won numerous awards, have been translated and anthologized. He is Drury University’s poet laureate. David Harrison Elementary School in Missouri is named for him. He has spoken at conferences, workshops, and visited hundreds of schools.

After Dark, David’s 97th book and 20th collection of poetry was released earlier this month. Three more are scheduled for publication later this year, and one for 2021. 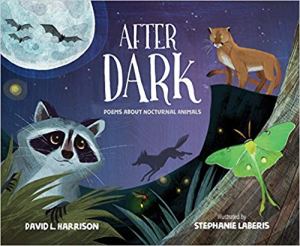 His first book – a picture book, The Boy with a Drum – was published October 1, 1969. His second, Little Turtle’s Big Adventure, was read on the air by Captain Kangaroo. His third, “The Book of Giant Stories,” won a Christopher Award.
Many of David’s books combine nature, science, poetry and humor. Both science and poetry require observation and the ability to describe what is observed. As a biologist and a poet, David has developed a lifelong habit of watching wildlife – and writing about it.
After Dark was inspired by sitting on the patio, listening and watching night life by the lake – as well as family camping trips from when he was a child. The 21 poems featured here are chock full of interesting scientific facts. 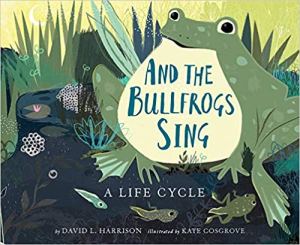 His last book, And the Bullfrogs Sing (Holiday House, 2019), is a free verse poem about the life cycle of frogs, accentuated by the chorus Rumm, Rumm, Rumm” and other bullfrog noises.David’s love of nature began when he was a youngster, camping with his parents (who also instilled in him a love of reading) and playing in his backyard. He studied biology in college and has two science degrees. Before he began to write, he worked as a pharmacologist and parasitologist. But it was a creative writing class he took while a science major at Drury in the 1960s, and a professor who encouraged him to write, that launched his writing career.
David’s ideas for poems and stories “appear everywhere in everyday life.” For example, one afternoon when David found insects under his welcome mat, he wrote this:

Bugs moved under
my welcome mat.
If bugs can’t read,
explain that.
I’ve always said
that bugs are pests,
but bugs who read
are welcome guests.
(From BUGS: POEMS ABOUT CREEPING THINGS, Front Street, Incorporated, 2007.) 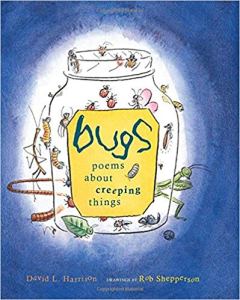 About poetry, David says:
“Poetry ranges from doggerel to sublime. At its worst, it should be shot on sight. At its best, it protects our language and reminds both writer and reader that every word has meaning and only the right one will do for the purpose at hand.”
When writing poetry collections, David tries to find the cadence and sound that fits the subject. He looks for ways to make each poem stand alone, but still fit the collection. He avoids common, over-used meter and rhyme schemes like a-b-c-b. He says, “I want my menu to feature a variety of offerings so readers don’t grow weary of the same-old-same-old.” He may combine various poetic forms with free verse poems in the same collection. Often, a poem will show him what form to use – “it just sort of develops, and I roll with it,” he says.

His advice to aspiring authors is “Dare to be different.” He explains: “By that I mean know the market but don’t worship it. If you read a book you like, enjoy it and move on. No point following someone else’s idea. Listen to your own voice, your own experiences, your own beliefs and feelings and passions.”